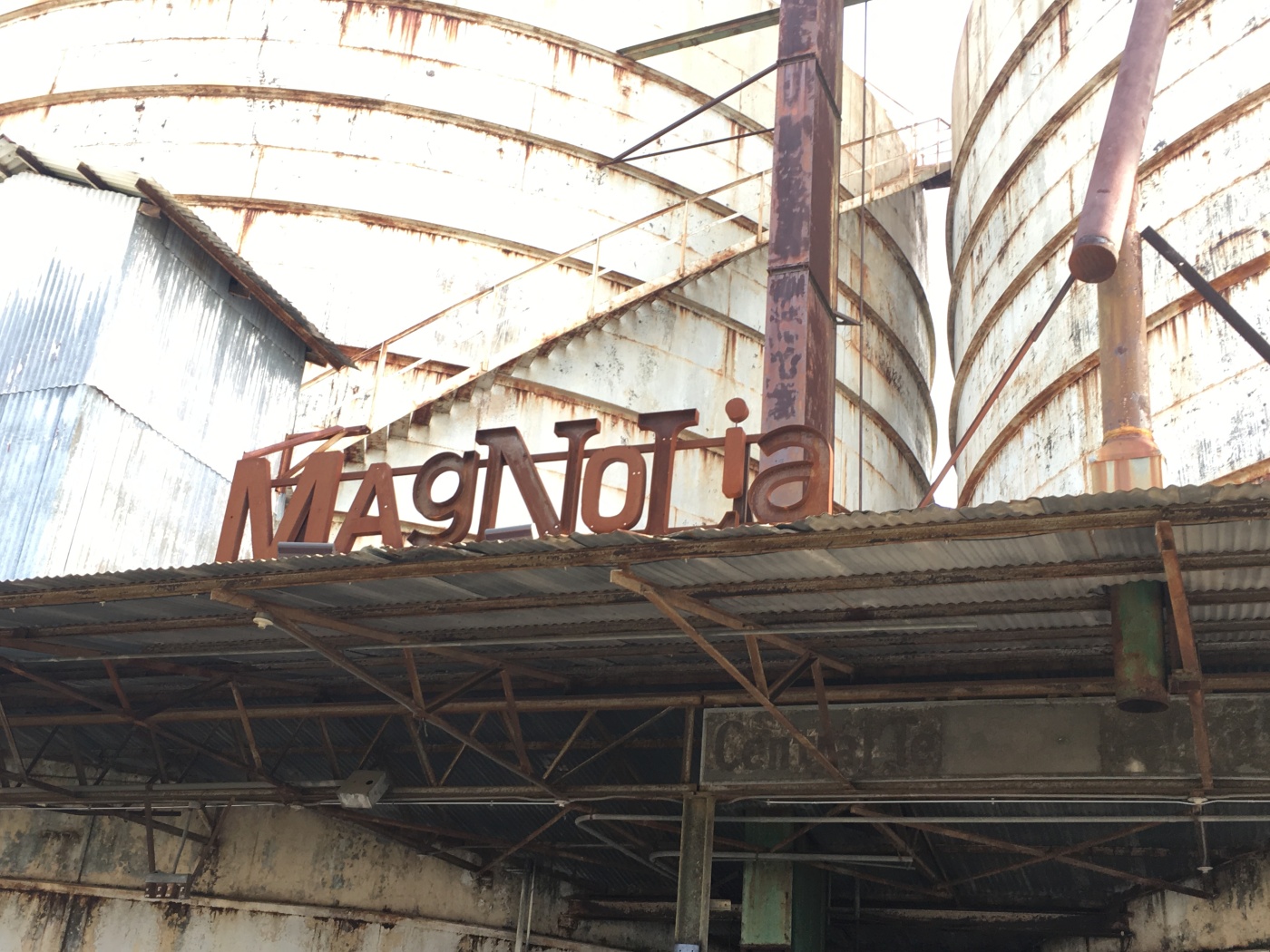 We spent just one day and one night in Waco, TX on our way south and I have to say it wasn’t nearly enough time.  We could have easily spent more time there.  In fact, this wasn’t originally going to be an overnight stop for us at all-just a quick stop through to hit a few highlights but as I began to research I began to get worried that it would be difficult to find parking for the truck and the Fancy Nancy in town, especially by Magnolia Market where we intended to spend some time.  I had asked another travel blogger what they did when they traveled here this past December and they recommended that I check out Midway Park, an Army Corps of Engineer Campground on Waco Lake, which is close to downtown Waco.  I followed their advice and it was so happy with our decision.  I will have a short review of that soon. 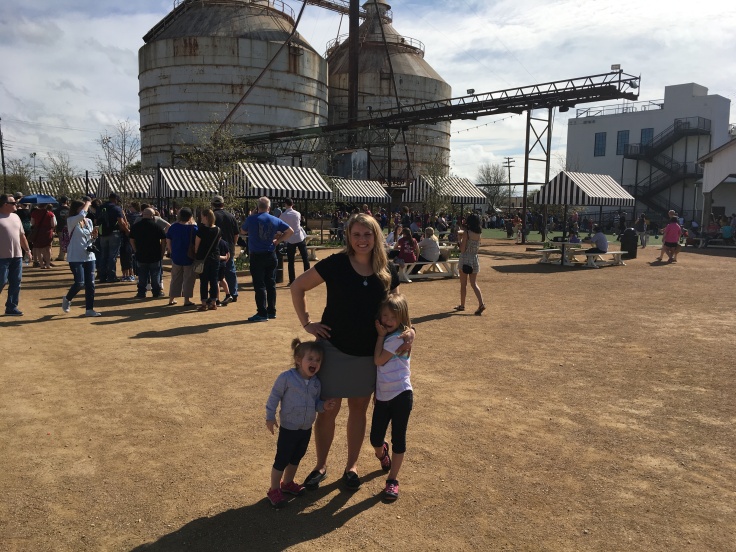 On our third day of our trip, we woke up early to get to Magnolia Market at the Silos early.  Their website recommends to arrive early and let me tell you, I am so glad we did.  We arrived around 8:30AM-the grounds open early but the store doesn’t open until 9:00 AM.  We easily found a parking spot in their small parking lot and made our way to the grounds and immediately fell in love.  I was expecting mainly just a store but there was so much more!  It was more of an experience than a place to shop and it was so inviting-but should I have expected anything less from Chip and JoAnna Gaines? 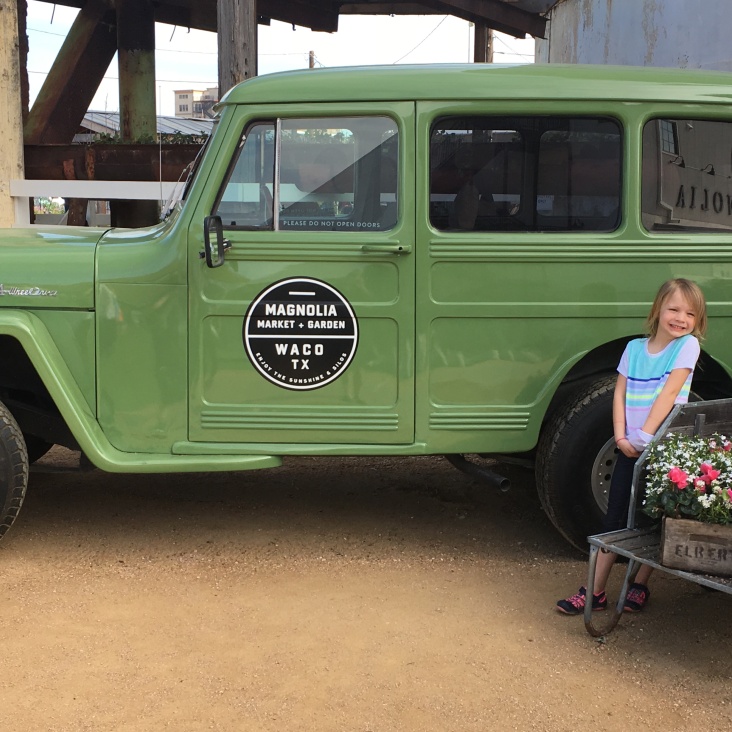 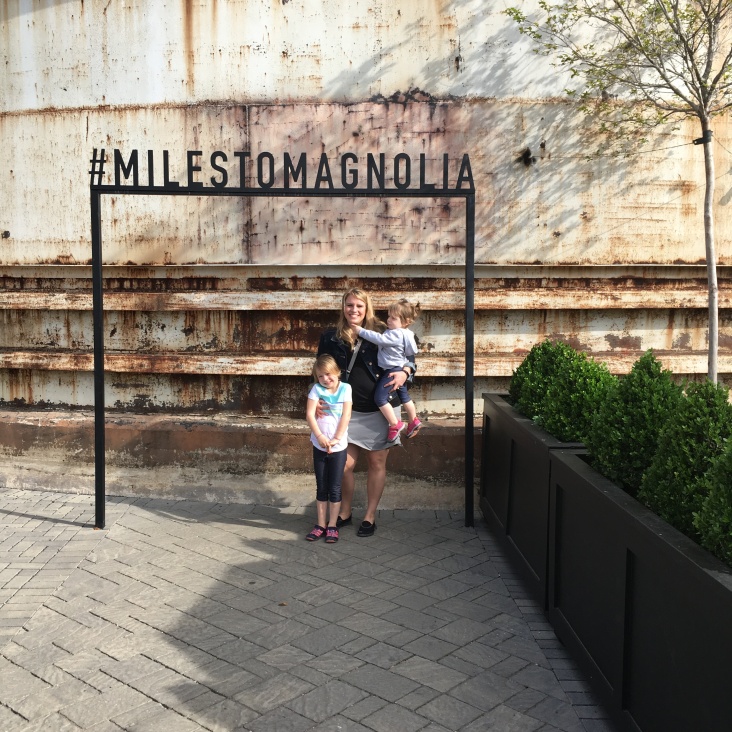 There was porch swings, wood ropes swings, a large green space with balls provided to throw around, cornhole sets, and bean bag chairs to lounge around in.  Music was playing and food trucks lined the outside of the market area.  The line to the bakery was rather long so I jumped in line to wait for the store to open. 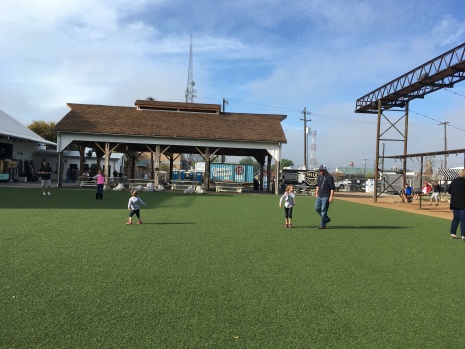 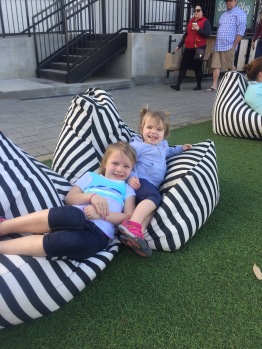 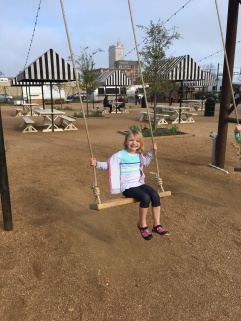 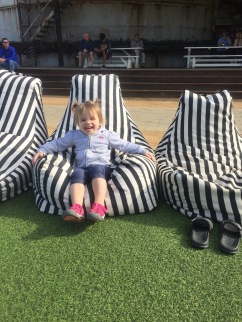 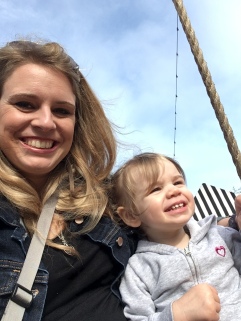 The line wasn’t too bad at this point, it only lasted until the store opened at 9 and then I was able to walk right in.  I browsed a little, knowing I didn’t plan to purchase anything but wanted to look around.  I did end up walking out with a coffee mug, a wooden postcard to frame as well as a gift for someone.  Just a few little souvenir items. 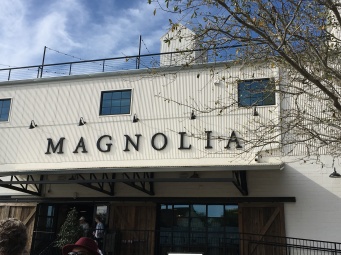 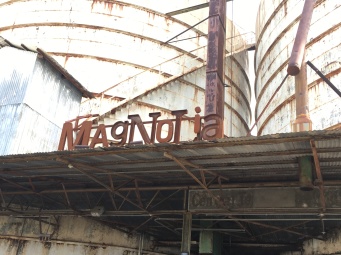 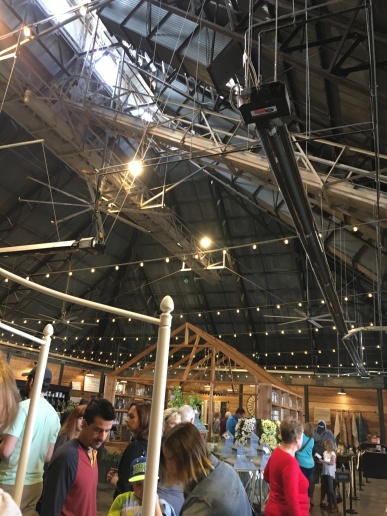 View inside the shop in the “Grain Barn”

After shopping I walked out and was so happy I got in line right away and that we arrived early as the line at this point wrapped around the entire property.  I was shocked and it had only been open for one hour!  We enjoyed a few items from the bakery-Elsie picked out the lemon lavender cupcake, I got the carrot cake and we picked up a few cinnamon rolls and we walked around a little bit more and then headed off to our next stop.  I wish we could have stayed longer and enjoyed everything offered but we needed to get to our next stop. 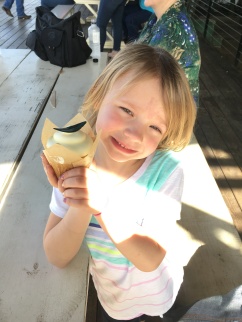 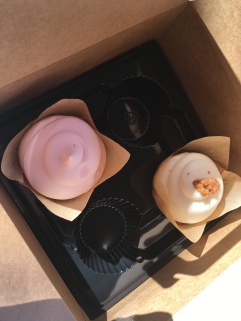 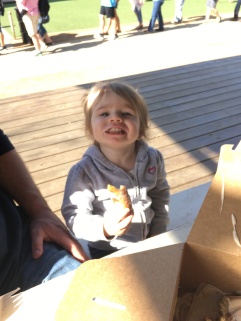 After departing Magnolia Market we made our way to Waco Mammoth National Monument.  This really piqued my interest since my college minor was in in geology with a focus on paleontology.  This was located just a few miles north of downtown and only took a few minutes to get here.  Waco Mammoth National Monument is one of the newest to the NPS system and is a partnership between the National Park Service and Baylor University.  This site displays the only Colombian Mammoth nursery herd in the nation. 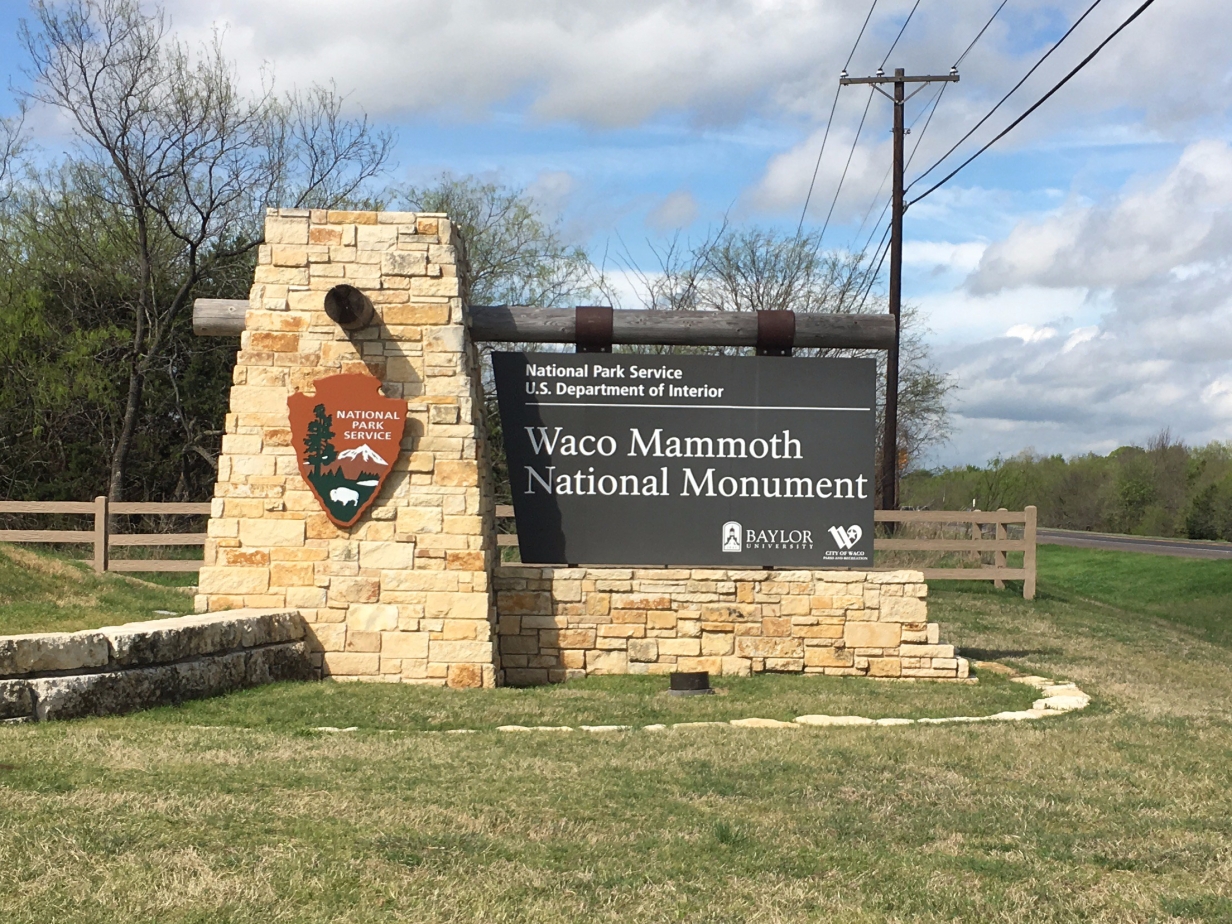 We chose to do a guided tour-something we do if offered.  We feel we always get more out of an experience when we do a tour ($5 for an adult, $3 for children prek-6th grade, under 3 Free).  Although our youngest was a bit of a distraction for us it was a very interesting tour and I know I learned more than I would  have on our own. 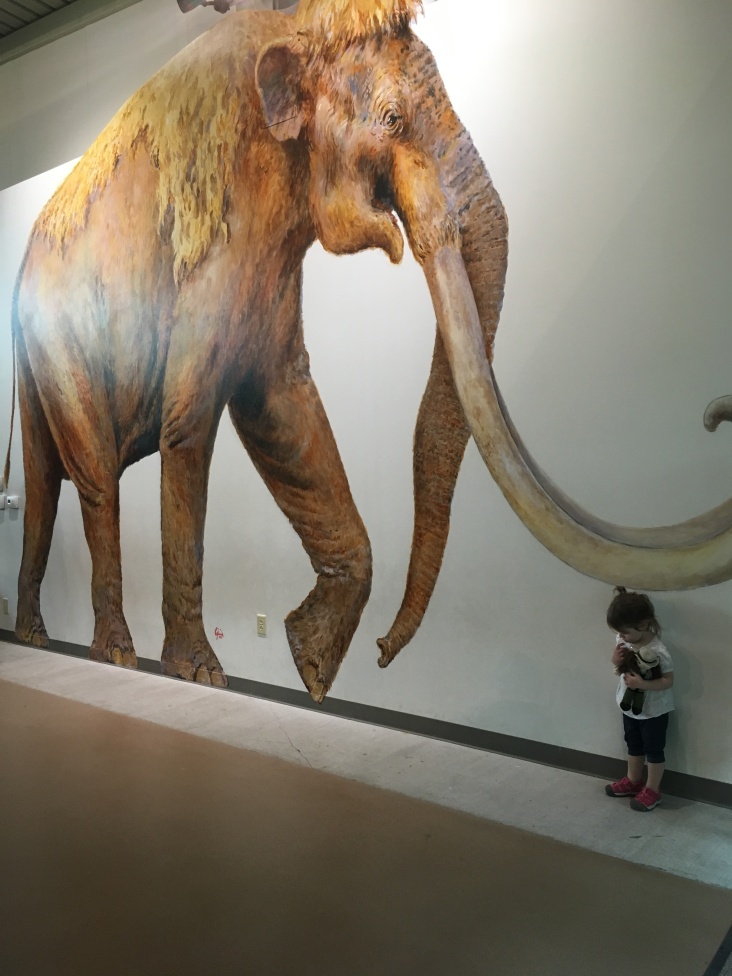 What is unique about this site is that the fossils are still there, in the rock-they haven’t been dug up and moved to a museum.  This is still an active dig site and there is a shelter built above it.  The theory of the death of these animals keeps changing but the most recent is that they got caught in a flood.  In fact, there are multiple layers of fossils which tells the story that there was more than one flood event over the tens of thousands of years that wiped out these animals. 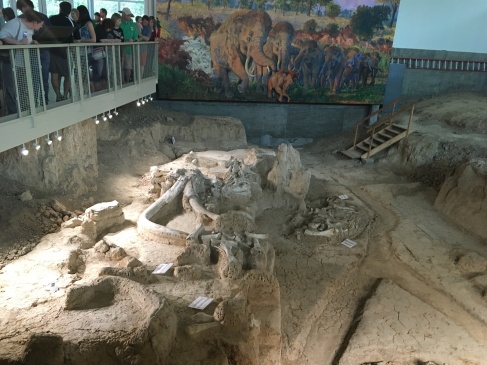 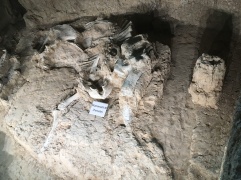 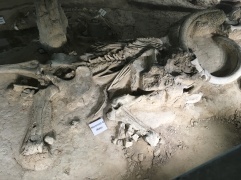 This national monument has a Junior Ranger program and if you have kids with you I highly recommend that you allow them to complete the program.  I actually was able to print the booklet ahead of time from a PDF found on their website and Elsie was able to complete some of the activities during our dive to Texas.

After departing we made our way back to Midway Park to pick up the trailer and keep heading south.  There was one restaurant I knew I wanted to eat at when we traveled to Texas and that was The Salt Lick in Driftwood, TX.  I discovered it in Roadfood by Jan and Michael Stern.  Let me just say I went into this eatery with VERY high expectations and it met every, single one of them. 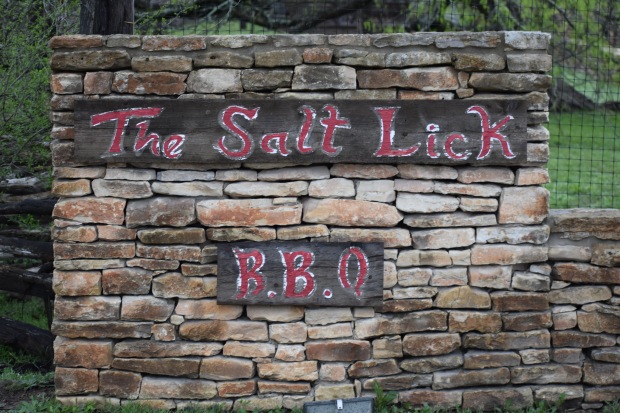 From what I have read about Texas BBQ it is more about the BBQ rubs than the sauces.  In fact, we enjoyed this BBQ sans sauce and it was AMAZING.  A few things to note. The parking lot was a huge gravel lot with plenty of space to park with the trailer.  It is a BYOB place so if you want to have beer or wine with your BBQ you have to be prepared and bring it yourself and it is cash only.  There was live music in the waiting area when we put our names in and our wait time was minimal, much to my surprise because the place was packed! 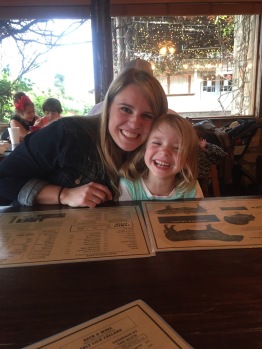 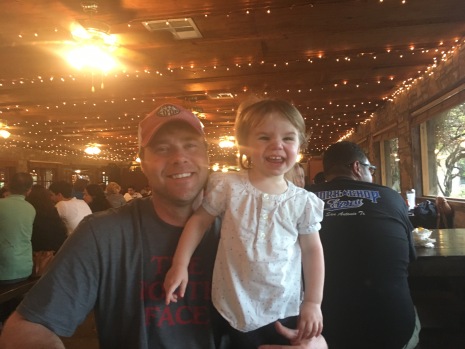 The menu was pretty basic but it was still hard to make a decision.  I loved the open air atmosphere that they had going on and just gave off a low-key vibe.  It seemed like the quintessential Texas BBQ joint-oh and all the smells!  yum!! 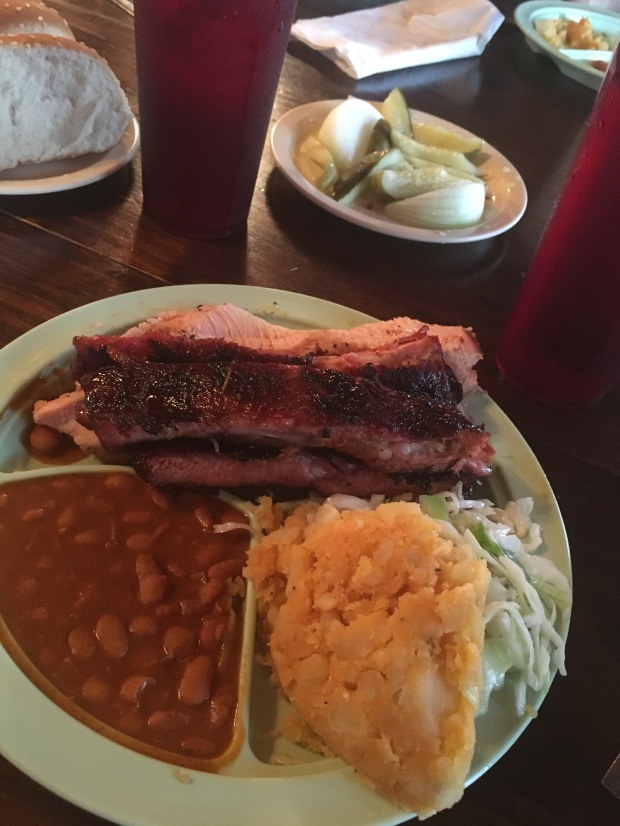 I ordered the ribs and smoked turkey and it just melted in your mouth.  All meals came with beans, potato salad, and coleslaw.  And if you are from the midwest, don’t expect that good old mayo based sauces on the potato salad or cole slaw.  The cole slaw was vinegar based and delicious.  Also by request you can get rolls and pickles and onions.  The pickles were a hit at our table.  They reminded me of the homemade pickles that I enjoyed so much in Poland.  They were so delicious that we asked if they sold them in jars to take home.  They didn’t but our server offered to bring us out a bunch to take with us!

Right inside the restaurant is the BBQ pit that you can walk by going to and from your table.  It was fun to show Elsie how they cooked her meal and it smelt amazing. 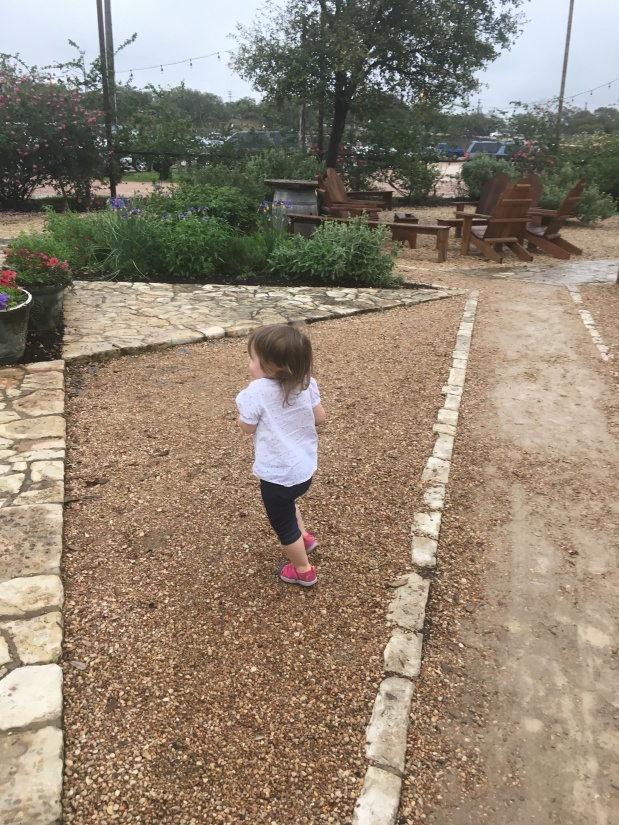 After the meal we headed outside to walk around the grounds a bit.  There were places all over to sit and relax, enjoy the gardens, or run around.  Evie especially like this part.  This was the perfect way to end our trip down to San Antonio!